Ahh...the first official day of Spring has arrived. You wouldn't know it necessarily from my perspective here in Michigan, where it is currently 21° F and there is a chance of snow later today. But despite the freezing winter still hanging on, I remain optimistic. I began noticing in the last several weeks the sun moving in the sky, and the light coming from it into our house has changed -- it's brighter, shining in at different angles.  For today is the day that the light and dark are of equal lengths, and the days will begin to get longer. More time to enjoy the outdoors. Yes...the long winter is coming to an end.  When I woke up this morning I was pleasantly surprised to see the sun was out, and find that a few of my herb seeds have sprouted, a good sign.

Many faiths celebrate this time of year. The word Ostara is just one of the names applied to the celebration of the spring equinox on March 21. The Venerable Bede said the origin of the word is actually from Eostre, a Germanic goddess of spring. Of course, it's also the same time as the Christian Easter celebration, and in the Jewish faith, Passover takes place as well. For early Pagans in the Germanic countries, this was a time to celebrate planting and the new crop season.1  Ostara is the time for new beginnings and awakenings, to act upon things we planned during the winter months. 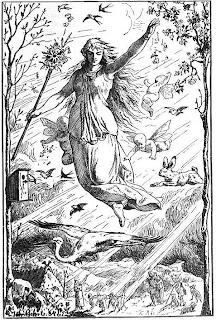 Ostara (1884) by Johannes Gehrts. The goddess flies through the heavens surrounded by Roman-inspired putti, beams of light, and animals. Germanic people look up at the goddess from the realm below.

Many symbols that are associated with Easter had their roots in ancient Paganism. Symbols of fertility and new life such as eggs, rabbits (In medieval societies in Europe, the March hare was viewed as a major fertility symbol -- this is a species of rabbit that is nocturnal most of the year, but in March when mating season begins, there are bunnies everywhere all day long.1), flowers and vines. Many parents take their children to visit the Easter Bunny, and my parents were no exception. 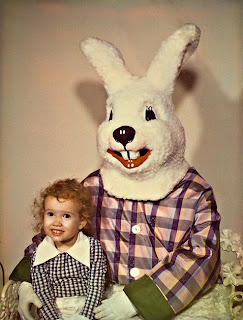 I look a bit unsure, but still likely enjoying the festivities of that time of year, anticipating coloring eggs and eating candy.  I have a childhood memory of an Easter Sunday after attending church, excitedly running around the wet and slightly muddy grass on the church grounds in my white patent leather mary janes, white tights, and new pink Easter dress, enjoying the warm sunny day. I got mud spots on myself, I don't think my parents were too pleased with that. ;)

Ostara Tarot Cards2 - Place the Chariot, card 7, on your altar as a sign of confidence in your ability to test what you have learned during the winter months.  Unlike the Fool, the Chariot knows the reason for his journey and creates his own destiny through his actions.  The Eight of Wands generates creative new ways forward.  The Magician, card 1, symbolizes the ability to visualize goals on the physical, emotional, psychological, and spiritual planes of existence.  He then asks you to get to work on those goals to make them your reality. 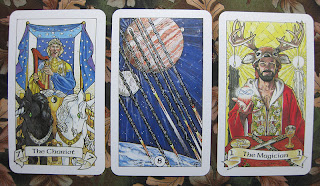 Cards from The Robin Wood Tarot

Ostara is the time of renewal, rebirth and change. Just as nature is reborn, what will be reborn in you? Start something new during this time, or look back on what you had done in the past that you enjoyed and bring it back again for a rebirth. Or take a look to see if some spiritual housecleaning is needed, this is a good time for that as well. 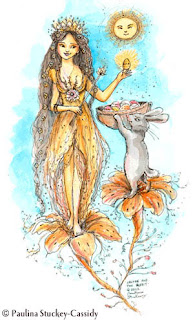 The Art of Paulina Cassidy

Be joyful on this Ostara, the wheel has turned, the winter months are behind us, and Spring is here again!

1. from History of Ostara - The Spring Equinox
2. from Tarot for All Seasons: Celebrating the Days & Nights of Power
Posted by Unknown at 10:38 AM